After creating the WinFE media, usage is just the same as any other forensic boot disk. Firstly, you must establish how to make the computer boot from external media such as USB or CD/DVD. click here to view common manufacturers boot menu option keys. 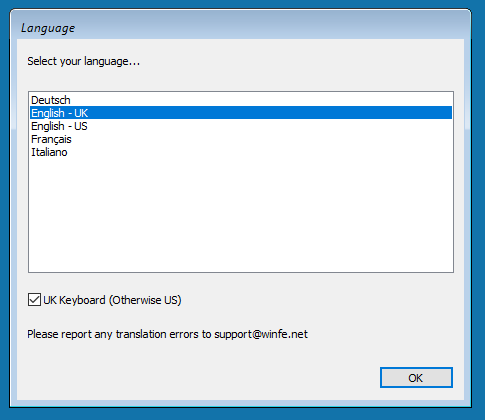 You will now be shown a warning with regards to applications that if used, may change the read/write status of attached disks. It should be noted that this list is not exhaustive. 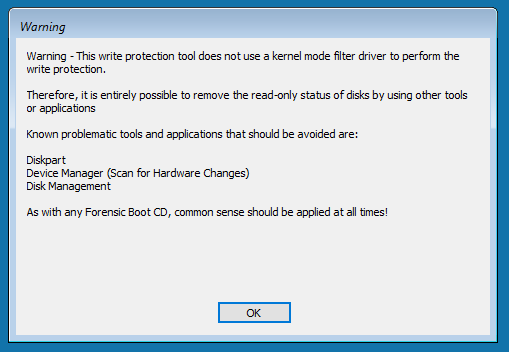 WinFE will display the disks that it was possible to enumerate, and the current state of these disks. Ideally, all disks should be in a state of read-only and dismounted. 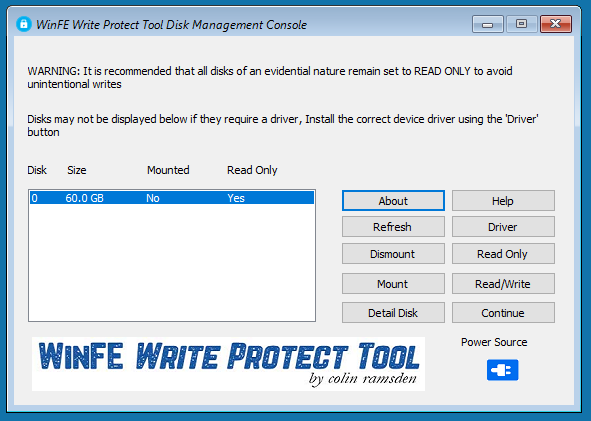 You should now change the status of your bootable WinFE USB HDD/Flash Drive to be mounted and read-write (this step is not applicable to optical media). Then click Continue to allow WinFE to load, when loaded multiple tools and applications are available from the menu located at the top of the screen.

If no other disks, or an incorrect number of disks are displayed, this could be because of several reasons.

1. The Hard Disk Drive or RAID controller requires a driver.

2. There are no other Hard Disk Drives present or they are not connected.

3. The Hard Disk Drive within the computer maybe broken.

The write-protect tool can be accessed from the Disk Tools menu to allow you to change the status of Hard Disk Drives beyond the initial changes that you may have made.

Within this menu option is a basic disk imaging tool, there is no real need to use this tool on Intel x86 or x64 builds, it was designed for the ARM build where FTK Imager does not (yet) exist. This is currently the only viable option for forensically imaging an ARM computer or server.

The Windows Password Tool has been incorporated in to all builds (ARM/x86/x64). This tool requires the volume where the Operating System is located to be mounted and placed into read-write mode, obviously this is not forensically sound, however, there may be occasions that you need to access a suspect's computer live or boot the system with a cloned Hard Disk Drive.

The standard reset tool allows the removal of Windows local account login passwords from Windows NT until the latest version of Windows 10/Server. It should be pointed out that the newer Microsoft online accounts are also supported within this tool. Any passwords that are removed, can subsequently be restored by running this tool again and checking the boxes that you previously removed.

The advanced reset tool allows the removal of passwords from Active Directory domain joined computers. If using this tool, ensure that the target computer is not connected to the domain network after the password has been removed. Again, the password can be restored by running the tool again, however, it is likely that the computer will be blocked from authenticating against the domain in future as the cached credentials will have most likely been trashed.

It should be noted that the Windows Password Tool is a paid for application (free for LE or Government). Please see the About or Contact pages for more information

These will be covered in brief, as many of them have multiple functions or it is obvious what they do.

Configure Network - PE Network has been included should you wish to utilise a wired network.

File Explorer - Explorer++ has been included as Windows Explorer is not available within WinPE.

Install Driver - Will allow you to install a driver for missing hardware, the .inf file along with any dependencies is required for this to work.

Notepad - This is the standard Microsoft Windows Notepad application.

Windows Defender - This is no longer included within the build process, it is entirely possible to achieve, however, it a laborious, convoluted process that would have taken too long to write a guide for.

Support is included for BitLocker encryption, either implemented on the harvest Hard Disk Drive or capturing an encrypted source drive.

In order to capture an encrypted source drive, it must NOT be imaged as a physical disk. It must first be brought online (mounted) with the write-protect tool, there is no need to make the source drive read-write, then image as a logical volume using FTK Imager.

BitLocker encrypted ARM systems must be imaged as a physical disk, then retrospectively decrypted.

The steps to capture a BitLocker source drive are as follows:

1. Identify the disk which contains the BitLocker encrypted volume.

2. Use the write-protect tool to mount the entire physical disk, leaving it as read-only.

3a. Open a Command Shell window, if you have the BitLocker recovery key, type:

3b. Open a Command Shell window, if you have the BitLocker password, type:.

4. You will now be prompted to enter the BitLocker password.

To mount your own BitLocker protected harvest Hard Disk Drive, follow these steps:

1. Identify the Hard Disk Drive which contains your harvest volume.

2. Use the write-protect tool to mount and change the status to read-write.

3. Open a Command Shell window, and type the following:

You will now be prompted to enter the BitLocker password.

The harvest Hard Disk Drive unlocked volume can now be used as an imaging destination.

Made in the United Kingdom

This web-site (https://www.winfe.net) is the only authorised distribution platform for the WinFE write-protect tool and associated applications.

It may be distributed freely providing no reward, financial or otherwise is received.

It is also forbidden to include the tool within any paid for (financial or otherwise) training package or other such material without the permission of the author.

The WinFE write-protect tool or associated applications must not be reverse-engineered, disassembled or otherwise deconstructed.

No unauthorised modification shall be made to the WinFE write-protect tool or associated applications.

Any person or organisation exempt from these rules will be clearly displayed upon the About page.

By using the WinFE write-protect tool and associated applications, you agree to abide by these terms and conditions.

THIS SOFTWARE IS PROVIDED "AS IS", WITHOUT WARRANTY OF ANY KIND, EXPRESS OR IMPLIED, INCLUDING BUT NOT LIMITED TO THE WARRANTIES OF MERCHANTABILITY, FITNESS FOR A PARTICULAR PURPOSE AND NONINFRINGEMENT. IN NO EVENT SHALL COLIN RAMSDEN OR ANY OTHER CONTRIBUTOR BE LIABLE FOR ANY CLAIM, DAMAGES OR OTHER LIABILITY, WHETHER IN AN ACTION OF CONTRACT, TORT OR OTHERWISE, ARISING FROM, OUT OF OR IN CONNECTION WITH THE SOFTWARE OR THE USE OR OTHER DEALINGS IN THE SOFTWARE.

Use the table below to establish what the boot menu key may be for your computer.

To access your computer's boot menu, connect the WinFE USB device or insert the CD media, turn on the power, then immediately, repeatedly press the boot menu key which corresponds to your make and model of computer.

When the boot menu displays, you should select the USB device (or CD) from the list.

Some computers do not use a boot menu, or it is not enabled by default, therefore, you may have to enter the Settings menu to be able to boot from external media. Please Note: I am only able to offer limited assistance with boot menu/BIOS settings due to the amount of variation between manufacturers and models.

Should you encounter any errors or omissions within the list below, please use the contact page to let me know.